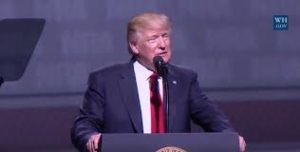 To be clear, this is about more than the President.

This is about all with a low IQ.

Let’s define what we are talking about.

Borderline IQ is in a range of 70 to about 84.  IQ can be influenced by a number of factors. Including external stressors such as how the person slept the night before, whether or not they have to use the bathroom, nervous tension and many other things.

In order to be able to vote in the United States of America, you need an IQ of?

Let’s get back to that.

President Trump consistently refers to people he doesn’t like as having a “Low IQ”.  While people don’t wear their IQ like a badge around their neck, IQ is not a predictor for success.  Rather hard work is a predictor.  Sure having a high IQ can help, but isn’t the true measure of success.  So why does the President continually refer to people as having a low IQ?

IQ plays an important part in the ability of a parent to obtain services and supports for a loved one.  For example, in order to qualify for Developmental Disability support in North Dakota, one needs an IQ of less than 70.  71 is too high.  But since, IQ alone isn’t a measure of success, other factors come into play.  Ability to be self-sufficient. Ability to process information. Ability to pay bills and manage money.

None of this explains why the President uses the term “low IQ”.

So let’s look at the population.  If the mean IQ is 100, that means that 50 percent of those tested have an IQ of less than 100.  Many sites online claim that the vast majority of people in the US have an IQ between 80 and 120.  So what does this mean?  Absolutely nothing. Why?

Because most people have never undergone a true IQ test.  And if they had, quite a few of those would never self-report their scores publicly. Which means?  That President Trump doesn’t really have any clue what he is referencing when he is talking about someone having a “low IQ”.

Why is this an important conversation?

There are untold numbers of people who genuinely have a low IQ.  These people are voters. They are entitled to be treated with the same propriety as anyone else who votes, including those who did or did not vote for President Trump.  In fact, I’d venture to say that people with an IQ of less than 70 likely qualify for some form of disability.  To refer to people as having a “low IQ” is in the same vein as using the R word.  It’s just plain wrong.

Is that a horrible thing?

Only in the sense that they are often times limited economically.  Persons with a low IQ could still run for public office, they can vote, work, drive, pay bills and taxes. Can you tell someone has a low IQ just by looking at them, reading their words, or listening to them speak?

So why does the President feel entitled to use the term “low IQ” in his slanderous comments about people who oppose him, vote against him, or generally speak loudly against anything he is in favor of?  Is it perhaps because people are either becoming tone deaf to the rhetoric of this President? Or is it because we are afraid of retribution against us for speaking out against our leader?

At least one of my kids has an IQ of less than 80.  This doesn’t make them less important than those of their siblings that have an IQ well over 100. To suggest otherwise is a scourge on the soul of our country.

Indeed, in the case of our President, the term “low IQ” could be an indicator of racism.  It appears that most of the people he refers to as having a low IQ are not caucasians.   That might mean nothing, but perhaps it’s a sign of the emotional quotient of our President.

Interesting in order to qualify for Mensa, a society of very intelligent people, one needs to score above the 98th percentile. Means you need to score higher than 98% of the population.