I try not to politicize my blog very often. But I just can’t “get there for the good of the party.”

The debate is about healthcare, but it’s really about so much more than that.  Isn’t it?

We are talking about healthcare.  Something that shouldn’t be dividing our country, yet is.

Let’s put it in big letters.

I get that it’s expensive.  I get that the People believe the Affordable Care Act, aka Obamacare, is the worst thing ever.  I get that people like me believe that what is happening currently isn’t good either.

There are a number of things I don’t get.

Let’s start with the first one.

Now, I don’t know Rand Paul.  But I have a question for President Trump. 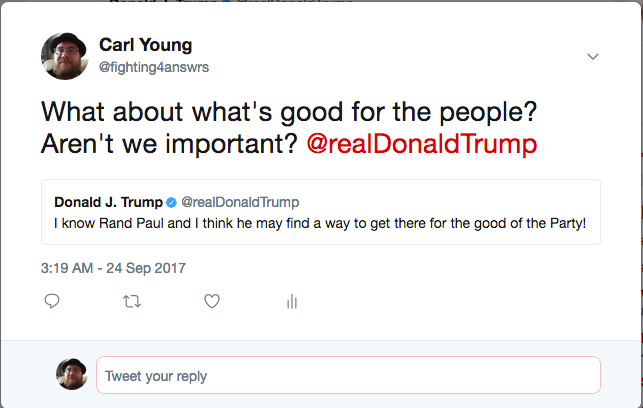 The debate is about healthcare, but it’s really about so much more than that.  Isn’t it?

If it isn’t, it should be.   Millions of American citizens are without power due to a hurricane.  Sure they live on an island paradise, but they are CITIZENS of our country.  Citizens of our country are STILL being killed because of the color of their skin, their neighborhood, or their life situation.  Those who are disabled CAN’T get the care that they require to be the fully functional people they want and can be.  And we haven’t talked about earthquakes in Mexico.  As people of the world, of humanity, shouldn’t we help?  Or does it only suit us to have the citizens of that country pick our fruit, pour our cocktails and support us on our vacations?

I don’t agree with the method that the professional athletes are using to get the country talking about the issues.  But I agree with their right to do so. And I think that you should too.  Why?  You don’t have to support their profession.  You don’t have to agree with what they are saying.  But if YOU want to be able to voice your criticism of others, you HAVE to support their right to voice or show their criticism of others too.  I also don’t agree with a lot of what the President puts out on his Twitter and think less is more, but it is his right to say the things that he does.  In the end, I’d take the knee, even when I don’t agree with the method.  I’d still take the knee.

Isn’t that the right and fair thing to do?  Or is it only what is “For the good of the party?”  I apply that wand to so many things.  We need the Congressional Budget Office to tell us what they can about the fiscal part of the proposed healthcare bill.

But let’s get back to the party.  Do you know what a party is?  What dictionary.com defines the word as?  here: 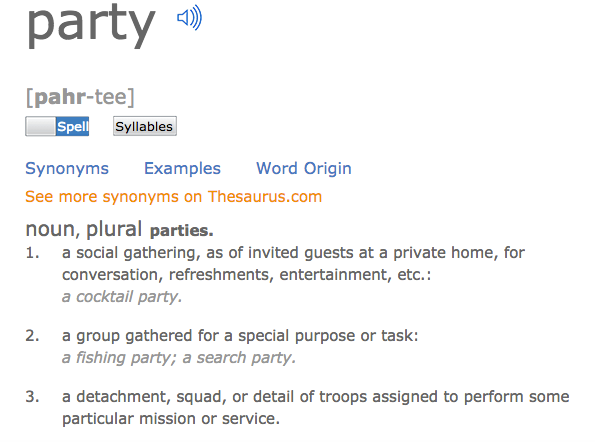 These are the top three definitions. Others include:  “Faction, a group of persons who support one side of the dispute, and the system of taking sides on public or political opinions.”

So here is my question, my number one question.

Mr. President, I don’t have the answer regarding Obamacare.  I don’t have the answer about Trumpcare.  I think quite a few of our citizens will have answers about “the party”.   We don’t want all of our elected officials to come together for the good of the party. Perhaps, any legislation drafted shouldn’t be named after the sitting US President.  It should be called “PeopleCare”.  Isn’t that ultimately what it’s about?  The People?

We want you to come together for the good of the people.

People were voted into office on promises.  Promises that are broken or being broken.  It’s time.  To be blunt, all of you in Washington need to either “Shit or get off the pot.”  If not, I imagine, that like the last few elections, a whole lot of flushing is going to be happening.  Our country needs to come together and support all people regardless of race, income, disability and sexual orientation.  I don’t care how much money you have, what color your skin is, what disability you may have and how you view yourself sexually; as long as you are a kind and decent human being we can be friends.  Heck we don’t even have to be friends.  But darn it Mr President, we are all human and deserve to put above any “Party”.

A call to action

Something to consider.  When the millionaires become the lower class citizens because all of the rest of us are gone, what will they do?

NOTE:  The opinions expressed here are mine and mine alone.  they are not a representation of any of the boards or committees that I may be a part of.