Don’t give up on me.

With those few words, “Don’t give up on me.” David ended our phone call tonight.

I assure him each time that I won’t.  He is our son and will always be our son.  See today he admitted to assaulting his mom.  If he had been adult, he would have been guilty of a felony. 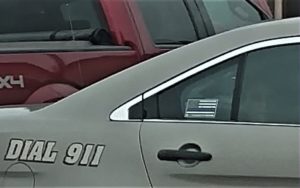 Look closely, this is not what people with developmental disabilities should go through

As it is, he is in a detention center where he has been since March 27th.  On Friday he will move to what is called a safe bed, which will allow him a bit more freedom, as well as a chance to get back on his medication.  (why the detention center for youth doesn’t give him his medications like they are prescribed is a fight for another day).  Then next Tuesday, he will be moving to a Youth Home in another city.

See.  For the longest time, we (his whole team) has referred to his condition as a mental illness.  And really, it’s more than that.

It’s a developmental disability.  His brain was harmed during development.  There is no “cure” for that.  There is maintenance and long term support. His condition is known as FASD  (Fetal Alcohol Spectrum Disorder)  it’s a condition visited upon him by his birth mom.  Because she chose to do drugs and drink while she was pregnant.  He went through withdrawals immediately after birth.

So with the upcoming placement we are hoping that he will get support.  That he will again stabilize and become the best version of himself that he can be.  He knows his brain is different.

Seeing him locked in the detention center has been difficult.  To have him in waist chains and handcuffs is very difficult to see.  This is not where he needs to be.  In truth, there isn’t really a place for the kids like him, kids who will grow into adulthood without a place in their world where they can be the best version of themselves.  Places that aren’t jail.

He needs ongoing support.  His executive functioning isn’t what the average person has, and he needs an external subconscious telling him to think about what he is doing.  To reconsider the actions he is undertaking.  This is done with staff support.

Don’t give up on me.

It’s not free.  It’s not cheap.  But for his world, it will be infinitely better than being in jail.  In jail, he will be even more vulnerable to the influences of more “powerful forces and people” who would take advantage of him.  He desperately wants friends, even though he really doesn’t understand the concept.  The people he calls his friends are not good for him, and influence him to do things that are wrong.  Support staff can help with that.

I could see David being a video game tester.  He could be very successful at that, and he would never have to leave his house to do it.  Success for David will look very different from what his peers will experience.  And you know what?

That’s okay.  Nothing wrong with that.