I Guess That’s My Cue 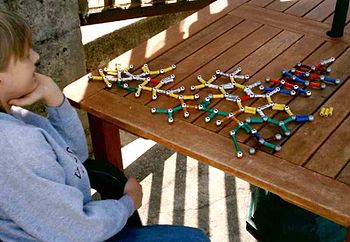 English: People with Asperger’s Syndrome are often preoccupied with particular, specialized areas of knowledge, such as this boy’s interest in molecular structure. (Photo credit: Wikipedia)

George has Asperger’s Syndrome, which falls in the Autism Spectrum Disorder list.  He does really well.

Earlier this year, he brought up the idea of attending Boys State.  So we encouraged him to apply.  He was accepted, but I could see as school ended, and summer began he was beginning to show some anxiety about what Boys State would mean.

We talked about ways for him to be successful.  About embracing those aspects of his Asperger’s Syndrome which will benefit him during the time at Boys State.  George has a phenomenal memory. I would say that he is highly intelligent, but he doesn’t like to show that off, because, he admits he is afraid of letting us down.

Today during the 5 hour drive to drop him off, we talked, we laughed, and we listened to an audio book.  We laughed at the sarcasm of the writer, the wit, and plot twists.  Most of all we just enjoyed the time together.

As we neared our destination, I could see the tension ease in him.  It was like he decided to let go of the anxiety around the day and week ahead.  We stopped at a store so I could get him a tube of toothpaste.  I then programmed our final destination into Apple Maps seeking succinct directions to the college campus.

Needless to say, that didn’t work out so well.  It seems Apple thought we should drive from our home in the upper Great Plains of the United States all the way to Los Angeles.  So I told George to just look for signs.

We reached our destination.  Got him registered, paid the deposit…  all the fun stuff.

It then started to rain like God was trying to put out the fires of hell.

I had a ball cap, George had a sweat shirt.  Water was deep in the gutter and up on the sidewalk.  So we waited until it let up a little bit before we raced to the van.

Because of the volume of water rolling through the street and gutter, I told George to wait for a bit while I brought the van up to the door.  My boots are water proof to a depth of 6 inches.  The rain let up quite a bit, and you could see across the street without imaging that you were seeing the parking lot.

Got my socks wet walking to the van.  With a bad hip and an odd gait, I don’t race anywhere.

I got half way to the van and God started pouring more water on the fire. At this point, I could have used a towel to dry off, I had just had my shower.  Poor planning on my part, I didn’t have any shampoo. And I forgot my towel.  Something you should never do.

I pulled up to the door just as the deluge let up again allowing George to get in the van.  He was dry compared to me.

Now, to find the dorm.  It was described as the sky scraper on the campus to the north of the building we were in.  Now I have seen skyscrapers, but, I guess where we live nine floors could almost be considered a skyscraper.  Grain elevators can be taller.  We found it, checked in, and sure enough, George is on the ninth floor.  Because of my hip and gait, we took the elevator.

When we reached his floor, the floor monitor pointed us to George’s room.  We got George situated, he received his room key, and I put it on his lanyard.  As I turned to George to ask a question, I handed him the lanyard with the key attached.

At which point, George looked at me and said “Goodbye Dad.”  I blinked.

I guess that’s my cue.

Three hundred and some miles later I am home.  It was harder for me to leave him there than it was for him to be left there.  I am so proud of him for stepping out of his zone of comfort and doing this.  I just know in my heart that he will enjoy his time at Boys State.   George may have Autism, but Autism doesn’t have George.

George, remember, if you need me, I am a phone call away.  I am so very proud of you.