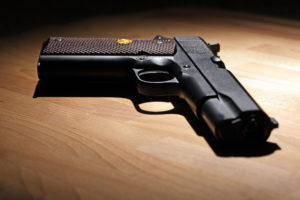 Rarely is there a more hot button topic than gun control.

Every time there is a shooting in our country, people start the roar of support for gun control.

What follows is my personal opinion about gun control.

In our home, we have had guns.  The key word is had.  With David in our home, I don’t feel safe having firearms in our home.  Too much risk for too little reward.  The guns aren’t the issue here.  Mental and behavioral health are the issue.  Criminals are the issue.  We could have the most stringent gun laws in the world, and it would make no difference on access to those guns by the people who do not abide by common sense and the law.

Regardless of the law, if people want guns bad enough they will get them.  Look back at prohibition when alcohol was outlawed.  Did the law prevent people from drinking?  Heck no.   Some will make the argument that alcohol doesn’t kill people like guns do.

Effective gun control isn’t about making laws.  It is about controlling access to guns.  It is about common sense.  We will never prevent a person from obtaining a gun even if it is illegal as long as that person feels  they need a gun for some reason.  It will never happen.  Firearms will always be available.  Reality bites.

Truly, if someone is willing to commit murder, why wouldn’t they be willing to break a few gun laws to do so?  What are we going to ban next?  Knives?  Vehicles?  Rocks?  Hammers?  Scissors?

I don’t know what the solution is.  But until we have effective mental health and substance abuse treatment in our country, nee in our world, people will continue to use guns to kill others.

In my home, gun control is all about keeping guns out of my son’s hands.  If that means not having them in my home, then that is what I will do and have done.

Let’s look at increased funding and supportive services for people with mental illness and substance abuse disorders before we spend another dime on “gun control”.

For those who like to cite statistics.  Give me something else.  Statistics can be directed toward almost any hypothesis.  Every major player in the gun control debate has their own statistics about why things should be done a certain way.  Instead, bring logic.

This is my opinion, and not endorsed by any council or board that I am a part of.

For those with loved ones who died today, my thoughts and prayers are with you during this tragic period in your lives.  It is of little comfort I am sure, but you have them none the less.