Searching for that missing link 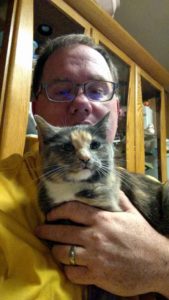 Our cat Cinnamon and I.

Thirty years ago, my dad took me aside and explained a small fact to me. “You are adopted, and here is the paperwork to prove it.  You are at an age where I think this is something that you should know.”

A couple of years before that, my brother and I made a wholly disturbing discovery when we found social security cards with our names on them, only the last name was different.

How we were chastised for making that discovery!

Over the course of the next thirty years, I would encounter many times when I was accused of being a “heavy drinker”, having a problem with my liver, or my blood just didn’t look right.

In the mid 90’s, our biological father was found.  A phone number was located and he was contacted.   The man I talked to so long ago was nothing like the investigative report that I had heard about.  All lies.  Everything was about him.  For a man I had not seen in, at that time, 25 years, I would have thought that we had more to talk about.

See, while our dad adopted my brother and I, mom has always been our mom.  Biologically speaking.  And while it would be easy to rail against her for not sharing the details of our birth father with us, she had her reasons for not doing so.

I don’t need to understand those reasons.  Sure it would be nice to know more about him, especially detailed health history, or at least as much info as could be had.  But that story is hers and hers alone to share.  Does this mean I agree with her decision?  No.  But I am not going to force her to share something that is obviously a troubling period in her life.  I wish that our relationship was stronger, but that takes two people to accomplish.  Not just one.

Over the years, I have been told that I have cancer a number of times.  Bone marrow biopsies and everything.  I light up a PET Scan.  PET stands for Positron Emission Tomography.  It is a radiological scan of the human body.  Generally if you see spots on a PET Scan that light up, it means you have some form of cancer.  I don’t know a PET scan from a pet scan for my dog.  I just know what the doctors told me.

Anyway, I have many of these spots, and every December I go in for a test to see if there is any change in the spots.  So far there hasn’t been. Knock on silicone chips. (knock on wood too)

I also have a neuropathy in my legs.  A neuropathy is where the nerves don’t transmit signals (information) the way they are supposed to.  In addition to that, I have an issue with my thyroid, fibromyalgia, serotonin syndrome, and a host of other “quirky” illnesses like Systemic Lupus.

About two months ago I decided to begin a search to see if I had any possible relatives that I didn’t know about through bio-dad.

Let me be clear, I have zero interest in ever talking to bio-dad again.  He gave me one thing that I am thankful for.  He gave me life.  I guess I could make an argument that he gave me something else.  He gave me the chance to be raised by another man, and the chance to know that other man as my father.  The man I call Dad.

If bio-dad were to show up at my door, I would call the police.  Seriously.  He is not a good guy.

A few years ago I did a four part series about the similarities of Houdini and Ronald McDonald.  Since then I have learned more disturbing information about bio-dad than I had ever hoped to know.  Along the way, I also discovered something.

I discovered that I have at least seven siblings. This is in addition to the two I already had.

I discovered that there is a history of cancer in the family, linked to bio-dad’s side of the family.  An uncle and two siblings died from the big C.

I discovered that bio-dad had a degenerative nerve disorder of some kind.

I discovered that there had been a cluster study done regarding the whole family and their liver idiosyncrasies.

I discovered that another group of siblings was raised by a single mom, much like my brother, sister and I were since mom and dad got divorced not long after the adoption was finalized.

There are other things that I discovered.

I discovered that bio-dad was frequently in trouble with the law from a young age, early teens.  I followed that path.  From the age of twelve to seventeen, I was not a pleasant person. I stole from everyone, and I stole anything.  I was violent when I was drinking.  But when I turned seventeen, I made a decision to change my life, and with the aide of a probation officer I was able to make that happen.

I have little regret in my life.  Do I wish some things had been different?  Heck yes I do.  Am I going to mope around at the hand I have played all these years?

Nope.  Living with chronic illness has taught me how valuable life is.  And while I would give anything to not have chronic health issues, I also wouldn’t wish them on any one.  I have been told that I have cancer.  Only to have been lucky enough to have the doctors come back a day later and say “No, you don’t have cancer, you have this other condition that is most prevalent in African-American women between the ages of thirty and fifty.”

In searching for health related information, I learned about the resilience of the human spirit.   I learned this from someone I had never in my life talked to before who also acknowledges that bio-dad is their bio-dad.

I learned about doing the best that you can with a given situation.

Now, you may be asking yourself, “what does this have to do with David?”

Easy.  David knows that he is adopted.  Unlike my situation, he never got to know his birth mom.  Never got to live with her. To grow up with her.

When he comes of age, he will ask about her.  I don’t know a lot, but I do know that while I may not think it is a good idea to contact her, I would help him figure out that missing piece in his life.  Simply because I know what it is like to have a piece missing.

You may also be wondering, “how do you know that the story these other people are telling you is true?”

When enough details match, and are able to be proven through consistent research, then short of a DNA test, you have to accept the results of the analysis.

My sister is lucky.  Dad is hers all the way through DNA.

I am lucky because when I see Dad, he lets me know he cares.  He does this by asking about my family and then me.   He does this even before he will talk about himself.  Then at the close of our visit, we end our time together with a hug, and then a handshake.  It is my understanding that bio-dads other kids never had this.  They aren’t looking for pity.

I remember a few years ago, the first time Dad told me he loved me and was proud of the man I had become.

For me that is enough.

I won’t push my other “family” for information more than they are willing to give.  I know from my perspective how difficult this is to talk about.  For all that, I am going to share something.

All my life I have taken in strays and unwanted animals.  I have been able to form some incredible friendships.  Some of those have been lost over the years because of time and distance.

I thank my “sister” for sharing information about that side of my family.  In the short time that I have known her, so many holes of information have been filled in and I am very grateful.

Whether or not there is ever a “family” type relationship between us remains to be seen.  It is just too early to tell.

When we adopted David, the adoption case worker asked me what I would base my parenting on.  I remember my response.  “Father Knows Best, Leave it to Beaver, My Three Sons, and The Brady Bunch.”

She said “you know that those aren’t representative of reality?”

My response?  “Neither is the way I grew up. In the end, I will raise my kids to be the best possible people that they can be.”

All these years later with two girls in college, and three boys not far from it?  I think that my bride and I are doing just fine.  Even with the struggles with David.  You do the best that you can with what you have to work with.  You can’t fault that.

David still has a lot of growing up to do.  Some days I find it hard to believe he is fourteen, when he acts more like he is seven.  There is always hope.