We were blessed with the appearance of one of the sisters for the night.  David has 2 brothers and 2 sisters.  The sisters generally don’t come around because of him, as is their right.

So we were doing the family thing, supper.  David got upset with me because I wouldn’t let him have pie without eating his meal.  And because he knows that he isn’t allowed to have Gatorade more than once a day and then only with permission.  He has been sneaking them.  It isn’t a big deal.

A bit later, we sat down to watch a movie, and things escalated when I asked him to please be quiet so that others could watch the movie.  Too much to ask for.

Since we make him ask permission to use the bathroom, he likes to start fires in there plus he has an interest in chemistry.  So I took him to the bathroom.  I don’t go in with him, it is just to keep him from getting into things he shouldn’t.  I thought that he was going to jump on his mom’s legs.  Readers may remember that she had double knee replacement 4 weeks ago.  So I braced him up against the wall.  When I let him go, he ran outside.

I went outside to keep him out of trouble, and he started throwing things out of the vehicles.  So I locked one car at a time.  He got within a foot of me, so I made to grab his shirt and hopefully him.  Instead, my hip went one way and the rest of me went sliding along the pavement.  He claims to have struck at me, but I don’t remember that.  At any rate, I have a nerve disorder in my legs, and right now it feels like a thousand needles are being pushed into this part of my leg.

I asked David to get me help.  He just laughed at me.  Said it was my fault for thinking I could catch him with a bad hip.  I went in the house, came out with my cell phone and called 911.  David claimed that he was happy about that, as that would mean he didn’t have to live with us anymore and could go to juvenile jail.

The deputies calmed him down.  And now he is in the house.  trying to start things up again. 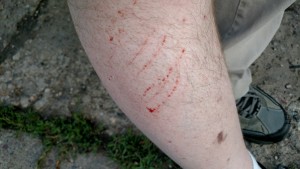 I should have had him cited, but honestly, I was going through the shakes of adrenaline coming down and didn’t think of it. Here is my leg. I am on blood pressure medicines that make me bruise, so will have a wicked bruise tomorrow.  I also have some tearing in the skin on my elbow.  It would have been worse had I not been wearing pants.

As a dad I hate having to call the sheriff for helping parenting my child. Nothing makes you feel lower than having to ask for help in controlling your child’s behaviors, except falling, then having said child laugh at you and refusing to get help.

We are blessed with a Care Coordinator that I can contact just about whenever and she will respond.  She keeps telling me not to apologize for contacting her after normal work hours.  She knows and understands the struggles that we are going through.  She is fighting for David and our family; has been for 6 years.

I have systemic lupus, plus a neuropathy in my legs.  I had labs done for the Lupus, and some of the markers are returning as positive for disease activity.  Stress feeds the disease.  Part of the Auto-Immune disease issue is that stress feeds the illness.

Wish us luck that we can get help for David sooner rather than later.

On Friday, lucky enough, David is with his mentor for 5 hours.  It will be a welcome break.

I overheard the him telling the deputy that I made him mad, that is why he was acting this way.  I hate to see what would happen if I make him really angry.