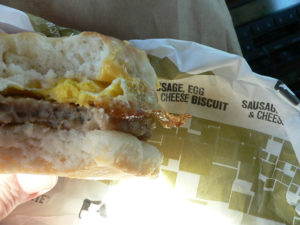 Some lessons need to be learned the hard way I guess.

At breakfast David was in his usual mood.   I always get irritated when the he puts an empty cereal container back in the cupboard.  I told him that it bugs me.

“But dad, there is cereal still in there!”  he said.

So I shook the container.  There was cereal alright.  Four or five pieces.

“That reminds me, another boy bought me a sausage and egg sandwich yesterday morning for breakfast.  I’ll have to eat that on the way to school.”  David stated.

I replied, “no, that is not a good idea, and you will get sick.”

David argues, “But dad, it was still wrapped.”

So mom and I both explained about food poisoning.  I don’t think he listened.

As I signed his daily report card, with him watching, we again extolled the concept that food, wrapped or not, that has been sitting in a van all day on a warm afternoon isn’t any good.

Not two minutes later, David asked, “Dad, did you sign my report card?”