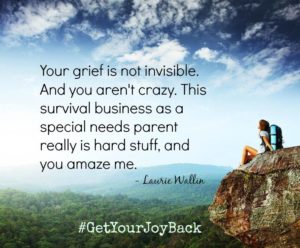 Last night was scary.  Not sure what happened exactly, but David is back in the hospital.

At 8pm, with his bedtime medicines he gets a snack.  He wanted oatmeal, instead I gave him a granola bar.

He said that he would hurt me if I didn’t give him the right snack.  He made a move to run, pushed our 8 foot long dining room table at me, pinching me into my chair.

I pushed back.  Then because I didn’t know what he was going to do, I picked him up, took him to the living room and said that if he wanted to go to the hospital that is what would happen.

He was ready to go in minutes.  Since we live an hour from the hospital, and the weather conditions were near blizzard like, I drove slowly.

David started turning the heat off and on, playing with the radio, rolling his window up and down, and then made the move.  He tried to grab the steering wheel while I was driving.  One of the vehicles he tried to crash us into was an ambulance.

I couldn’t both try to drive and keep him from taking the wheel, so I pulled off the road.

David was throwing things out the window, reaching over to turn off the van (something he did repeatedly).  I called 911 to request assistance.  Because we were in another county the call was transferred to another Sheriff office.  We waited on the side of the road for about an hour for the deputies.  By this time, David’s evening medicine was beginning to take affect.

So I asked him if I could drive the rest of the way into town.  I also asked about turning on the heat.  His reply, “Yes, and thank you for asking.”

David reported to me that he was seeing a dead friend of ours as well as our dog Brownie, who died more than a year ago.

David is most honest when he is in that stage where his medicine is just taking affect.

At the hospital, when the doctor asked him about what was going on, he told them the truth.  He wanted to crash the van. And that he was angry that he didn’t get the right snack.

This morning, David reportedly told the social worker that the dead friend and our dead dog were talking to him.  Telling him that some people need to be killed.

I am afraid.  Last night when he was trying to crash us, I knew real fear for the first time.  Having it reported that he is talking with dead people, scares me even more.

Now, there is a chance that David is telling stories. Something he is very good at doing, but there is also a chance that he isn’t.  That he really is conversing with the dead.  Or believes that he is.  I have seen and heard David carrying on conversations with people, when he and I are in the room alone, and the only ones home.

So now what do we do?  The hospital reported that it can sometimes take months to get a placement in a facility.  That they would help as much as they could, but sure couldn’t keep him in the mental health unit for a couple of months.

Up until 8pm last night, we had had a fairly good weekend.