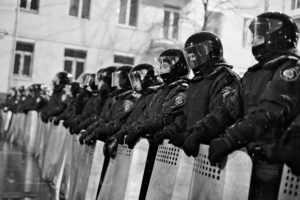 What do each of these names have in common?
Brown.

Not only was someone killed.  Rioters proceeded to destroy the very communities that they claimed they wanted to protect.  Why burn down a senior center that was under construction?  What did the seniors in the community do to deserve that?

How does destroying the property of a third person ensure that the victim will be remembered?  How does it bring justice?

It is a travesty.  All the way around, from the killing of the initial victim/perpetrator/drug user/killer to the attacks on law enforcement, the attacks on innocent people who are in no way affiliated with the violent act that caused people to decide to riot.

In Ferguson, reports indicate that agitators who didn’t even have ties to the community helped incite the violence.

What will Baltimore show?  In one example, looters broke through the roof of a liquor store.  What were they looking for?  Liquid courage?  How does robbing and looting further the cause of the disenfranchised?   Tuesday, as the citizens of Baltimore wake from the nightmare that has become their existence, schools will be closed.  CNN, reports that parts of West Baltimore look like a war zone.  The looters raided a CVS Pharmacy.  What role do businesses, schools, and children play in the death of the people listed at the beginning of this post?

It is a sad testament to our society that this has become acceptable response to things that people don’t like.  This 24 hour period of infamy for the stupid and cowardly acts of criminals.  Criminals are the people who use a protest as a means to plunder the resources of another.  Mob mentality at its finest.

Is it sad that these people all died?  Damn right it is.

That sadness is not an invitation for the response that these people are undertaking.  This isn’t protesting.  This is destruction of property under the guise of the First Amendment of our Bill of Rights.

It shames me that these people, for the most part, will get away with what they are doing and have done.  Protest an injustice?  Fine, but how does the methods employed qualify as a protest?

I don’t think it does.

But then, I am just a hick from nowhere who has no idea….

In this world, I am trying to teach my son, who has severe mental health issues, right from wrong.  And even he understands that what is happening across our country is wrong.  The methods of protest are wrong.

Stand up for yourself, for your community.  Don’t let these people destroy it.

The Baltimore Sun quotes the mayor as saying “It’s idiotic to think that by destroying your city, you’re going to make life better,”