Since his primary changed a couple of weeks ago, he has been in a down hill slide.  Can’t undo the change in primary because one staff member changed employment. 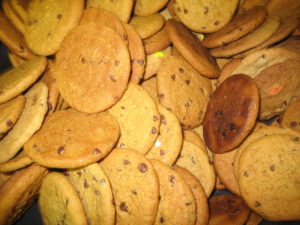 As part of his treatment plan he is isolated from his peers at meal time, as that is when he provokes most frequently.  He can not enter the kitchen/dining portion of the lodge without a chaperone.

We tried to assure David that there are no plans to move him.  If anything we are increasing the praise we are giving him for the good things that he does, and not focusing on the negative.   In essence we are trying to give him positive support.  Yet he seems determined to sabotage himself.

This week he stole nearly 2 dozen cookies.  I haven’t received a list of the other items yet, but since David has a history of hoarding food, they make sure that I know when he is doing so.  He also has a history of theft, but that hasn’t really been an issue.

Accentuate the positive.  He has made so much progress since he has been at the current facility.