Last month you may remember reading about David having a seizure.  The psychiatrist put it down to his medication.  As a result of my demands, they sent him to a neuro-psychiatrist.  The neuropsych doctor ordered an EEG and a MRI.

Staff was instructed to keep parents informed about the testing dates so that they could be there to offer support to David. 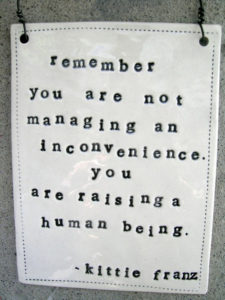 Today, I received a call from a lady who identified herself as a nurse.  Said that she had taken David to his MRI and now they were waiting on the EEG appointment.  Claimed that she understood why I wasn’t there because of the icy roads and blowing snow that we experience here in the north country.   I asked her what tests she was talking about.  We were never notified of any tests.  She asked me if I wanted to speak with David.

David indicated that he had a stomach ache most of the night because he had been thinking about his test.  Which tells me that someone knew about his tests yesterday.

I notified the staff that I was displeased with the lack of communication.  Again.  This isn’t the first time we have complained about communication issues with the facility where David lives. In all communication with the staff, I try to use email, as it allows me to keep a record.

I received the following in part reply from a staffer.

I’m not always kept in the loop on medical appointments.   If I did get an email regarding the appointment, I missed it and apologize; however I  looked back at my emails and couldn’t find anything.   I guess, I’m not sure why she would have expected you to be there if they didn’t notify you or send me an email.  Either way I’m sorry that you weren’t informed of the appointment.

I understand communication can be an issue, however… apologizing every time there is a communication issue doesn’t negate the fact that communication needs to occur.  It isn’t like we are communicating via “Pony Express” or a telegraph using Morse Code.

I wonder if they will remember to share the results of the tests with us.