We saw David today.  The plan was a two hour visit.  We were there 20 minutes.

The argument started because David decided that he wanted to be obstinate.  I was getting the situation defused when David decided that he was done with the visit and took off down the hallway.  I had to go after him to ensure that he didn’t get into anything he wasn’t supposed to.  Once he was outside, I hollered for him to stop and talk to me.  He was about half a city block away and picking up speed.  Staff at this point was coming out of the residence.  So I told them that he was running away from us. 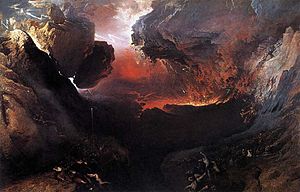 The Great Day of His Wrath (Photo credit: Wikipedia)

In his anger, he left behind all of his toys.  So his sister brought them out to the door by his cottage.  David erupted.  Said that she was stealing his stuff.  His sister engaged and defended herself.  You don’t go against David even if you are defending yourself.  So I stepped between them. I calmly took the toys and was going to give them to staff.  David didn’t want that.  So I set the toys on the ground, we got into our vehicle and prepared to drive away.

David was missing a ball that he had thrown across the room in anger, so he slapped the windows on the car and started yelling that we had stole it.  We explained to staff that it was in the room where our visit was.  Then we left.

The kids have decided that they aren’t sure that they want to see David for a while.  I won’t force the issue.

David is of the opinion that he is never in the wrong.  As we were leaving I told David that I would call him later.  He said “I don’t care if you never call again, I hate you.”  Which I know is just his mental illness talking.

It has been a while since we were the brunt of his anger, and I think that the rest of our kids were surprised about how scary it is.  This is why we can’t have him come home.  When he was home, it was like this everyday.

We stopped and let all of the kids calm down.  Got them a book or two, and then left for home.  While we were there, I contacted the residence to see how David was doing.  He was fine.  In fact he was outside playing basketball.

a short while after that, he called mom.  and apologized.