David – Attention seeking or something more? 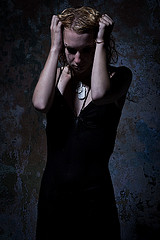 We received the following update about David.

David began acting out last night around 20:00. David was licking his hands and wiping them on furniture and the white board. Staff directed David to wash his hands. He complied at first, but repeated the behavior multiple times in an attention seeking manner. We attempted to ignore the behavior, but David did not stop. He was given a grounding after he refused his academies.

David ran into his room and began banging on his door. Staff opened his door to make sure David was not banging his head and offered David his brushing and weighted blanket. David refused. David ran to the other side of the cottage. Staff prompted David to return to his side of the cottage, per his safety plan. David complied. David ran into his room and began banging against the wall, telling staff it was his head. Staff opened the door. David began flipping furniture. Staff began locking residents rooms and bathrooms to prevent David from entering them. As Staff was locking David’s door, David pushed her. Additional staff were called to transport David to the time out room. David walked to the time out room at this time. Staff told David his expectation was to stay in the time out room for fifteen minutes or until he had calmed down. Nursing was contacted for approval to give David at 20:05 Zyprexa disc melt. Nursing approved. Staff administered the abilify disc melt at 20:10. David remained in the time out room until he reached tension reduction then went to bed.

They did not call us at the time of the incident, and we plan to take issue with that.  On the other hand, they followed his treatment plan.

There is a lot that I don’t know.  I don’t know if David was hitting his head.  But for him to be overturning furniture, I would say that he was in a manic state.   Initially he was attempting to get attention in a negative way.  I get that.  If they had truly ignored it, would the issue have escalated?  Most likely. David’s behaviors would have escalated until they reached a fever pitch at which time the end result would have likely been the same.

I wonder what the trigger was?   Was there a change in his routine?  A change in staff?