David has entered the psych unit. 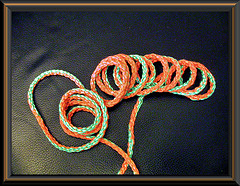 David has been really struggling lately with his mental illnesses.  I use plural for a reason.

Today, a lot happened.  He became combative.  It took four adults to restrain this 80 pound boy.  He becomes very strong when he is on this part of his “cycle”.  Meds don’t work, calming techniques don’t work.  The only solution is to put him in psych until he is stable again.

I applaud his care team for taking this step.  They didn’t do it without talking to his parents first.  In fact, it was our idea based on what they told me he was doing.  It is not a healthy thing for him to continue on this path, so we need to make some changes.

A major reason that we did determine to place him in psych was that he took his shoe laces and wrapped them around his neck.  tightly.  He has scars on his hands from where he has hurt himself in the past.

So if you would, please a prayer for our son.   We have to remember that the meds are there to stabilize him.  Not cure him.  There is no cure, only stability.