Dreams and other things

Each night, as I lay down to sleep, I dream that I hear David moving around in the house.  He hasn’t been home since October 3, but still.  I feel the urge to get up and check on him.  To shine my light near where his head ought to be.

My nightly ritual used to entail a book, a light, a flashlight, slippers, and my pj’s.  I would check on David, then curl up in a chair near his sleeping form and read.  The flashlight was because he could be sneaky, and I might need to shine the light somewhere quick.

Then I got a Kindle Fire.  Didn’t need the light anymore. 🙂  as long as it was charged, I was good to go. 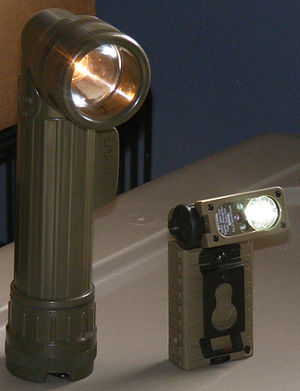 English: Two flashlights commonsly used by the United States Marine Corps. The left is a plastic Vietnam War-era “moonbeam”, bought by recruits and powered by D-cell batteries. The right is a new tactical flashlight, issued by the Corps and powered by AA-cell batteries. It uses Light-emitting diodes to project five different intensities of white, red, blue, and infrared light, including a strobe function and a helmet mount. (Photo credit: Wikipedia)

David has the knack for sneaking around.  he got be more times than I could count, and since he is an amateur locksmith, a part of the nightly ritual entailed checking to make certain that all of the cupboard locks were still locked, and that the fridge lock was still in place.

After that, a quick peak in bedrooms to ensure that David hadn’t achieved magical status and stole into their rooms to root through their belongings.

If something had gone missing the day previous, I would spend part of the night searching for it.  More often than not, it was in David’s things.  And since he liked to hide stuff everywhere, sometimes the best way to find stuff was to wake him in the middle of the night and see if he had stuff hidden on his person or in his bed.

Even 7 months later, we still occasionally find things that David had stolen and hid.

As much  as I miss David, I love the fact that our other kids finally feel safe enough to come out of their rooms.  Tonight a couple of the kids played on the Wii.  Something that they hadn’t felt able to do for a long time.