As you know… I am a proud Canadian.  I am also proud of the fact that I can, as much or more than anyone else, enjoy a little Canadian humour…. and I know, there’s a lot of it!  There are some very strong stereotypes of life in Canada, and I for one, love the fun of them…though not all Canadians do! 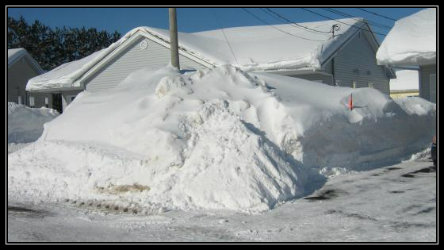 Certainly, by far, Canada’s probably most well known for our weather.   Heck, we’re the ‘Great White North’… and if any of you are old enough to remember Bob and Doug McKenzie… well… enough said!  Things sure have changed from when I was a child though.  I remember snowbanks that were over six feet high (which by the way were perfect for snow forts!!) and building hills out of snow in the backyard that we could toboggan down… and if you wanted, you could have left the back door open and run the toboggan right down the stairs!!  As kids, who wouldn’t want to do that?!?

The one thing we could ALWAYS count on was a white Christmas!  Today things seem to be going the other way… it saddens me that my son can’t enjoy the fun of the snow on Christmas Day in the same way I did growing up.  The joys of spending the afternoon building snow forts, snowmen and having a good old fashioned snowball fight before going inside to have some hot chocolate by the fireplace.  Now those are some great memories!!  Now it seems the norm is more often a green Christmas… occasionally we get a light dusting of snow… but not the good Canadian Christmas snow that we used to get.

So before I go, I have this to say about our stereotypes!  Did you know that our main food staples are maple syrup, Kraft Dinner and bacon, but we do eat other things… especially poutine!!  And despite what you might think, our Mounties don’t live igloos, nor do the majority of Canadians.  We do love hockey and many of us have been seen walking around with a hockey stick in one hand and a beer in the other… that’s just part of a Canadian winter!  We don’t have dogs for pets, unless they are sled dogs, and in most places we don’t have polar bears walking up and down the streets (yes, I’ve been asked this before)!  Yes, we do have electricity AND indoor plumbing!  Sadly, we have all gotten into the routine of apologizing for things, even when it’s not our fault… sorry about that, eh?!  Now, I’m off to get my parka and toque, jump on my ski doo and head to the big city of Toronto to grab some poutine and a cold beer with the loonies and toonies that I have in my pocket! Later, EH?! 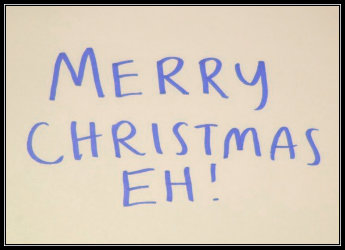 Merry Christmas my friends… and if it’s appropriate, may it be a white Christmas!!  And if I offended any fellow Canadians, I apologize!!