ugggh, calgon take me away

Anyone remember that commercial? 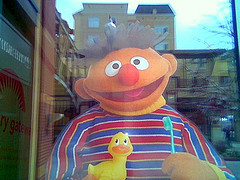 I feel like that lady tonight.  No, I am not going to caress myself with bubble bath. I am not a lady at all. I am a stay at home dad.  hear me roar… {meow}

David is in full form tonight.  He chopped the cord from a keyboard, he stole keys to doors on the house, one we found, the other… not yet.  in due time.  Last night he broke into the upstairs of our house and stole his brothers Nintendo DSI.  He stole all of the double A batteries out of our bedroom.

What else… His school teachers described him as “very verbal” today.  Yeah… you could say that.  He has been talking incessantly for four hours.  and if he thinks that you aren’t listening he will repeat the same thing over and over again for half an hour or more.

What else… in our search for the keys we pulled his bed away from the wall, and found most of two packs of Ramen Noodles crushed into the carpet.  We sent him back there to clean up the paper so we could run the vacuum, and he started eating them off the floor.

Everything tonight has been about David seeking attention.  If we don’t give it to him willingly, his behavior escalates until he takes your attention.

The very last thing that he did is pour his liquid medicine all over the floor of the kitchen.

Now, where is my bubble bath?

« long night and early morning
Reblog:: Obesity: There Ought to Be a Law. But Wait—There Is! »

2 thoughts on “ugggh, calgon take me away”