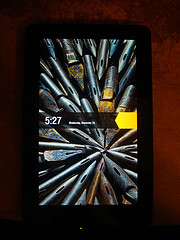 David got angry with his brother because his brother asked him to leave a room David isn’t supposed to be in.  So he stole my Kindle Fire.  Not a huge deal in the grand scheme of things, but how does that help?

He isn’t allowed technology and especially facebook because he likes to friend people he shouldn’t and threaten people.

What good did it do for him to spend 3 full days in the hospital?

« another night done. starting anew with old behaviors
the teacher becomes the student. »