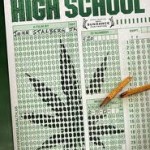 Eighty-six percent of American high-school students say that their classmates are doing drugs, drinking, and smoking during the school day, according to the 2012 National Survey of American Attitudes on Substance Abuse conducted by The National Center on Addiction and Substance Abuse at Columbia University.

The CASAColumbia teen survey revealed that 44 percent of high schoolers know a student who sells drugs at their school.  Asked what drugs students sell on school grounds, 91 percent said marijuana; 24 percent said prescription drugs; nine percent said cocaine; and seven percent said ecstasy. The survey also revealed that 52 percent of high school students say that there is a place on school grounds or near school where students go to get high during the school day.  Thirty-six percent say it is easy for students to use drugs, drink or smoke during the school day without getting caught.

For the sixth straight year, and for seven of the past eight years, 60 percent of high school students say that they attend a drug-infected school, where drugs are used, kept, or sold on school grounds.

For the first time in the survey’s history more than half of private high school students say their school is drug-infected, a 50 percent increase over the past year, from 36 percent in 2011 to 54 percent in 2012.  The survey showed that the gap between drug-infected public and private schools is closing.

“For millions of American teens, drugs and alcohol, not more advanced education, are what put the ‘high’ in the high schools they attend,” said Joseph A. Califano, Jr. Founder and Chairman Emeritus of CASAColumbia and former US Secretary of Health, Education, and Welfare.  “For millions of parents trying to raise drug-free kids, the ‘high’ school years are the most dangerous times their children face, and the ‘high’ schools are a dangerous place to send their kids.”

This year’s survey took a deeper dive into the world of teen social networking.  The CASAColumbia survey found that 75 percent of 12- to 17-year olds say that seeing pictures of teens partying with alcohol or marijuana on Facebook, MySpace or another social networking site encourages other teens to want to party like that.  Forty-five percent of teens (10.9 million) have seen pictures online of other teens getting drunk, passed out or using drugs.  Forty-seven percent of teens who have seen these pictures say that it seems like the teens in the pictures are having a good time.

Compared to teens who have not seen pictures on Facebook or another social networking site of kids getting drunk, passed out, or using drugs, teens who have seen such pictures are:

“This year’s survey reveals a new kind of potent peer pressure—digital peer pressure.  Digital peer pressure moves beyond a child’s friends and the kids they hang out with.  It invades the home and a child’s bedroom via the Internet,” said Califano. “So parents should be aware of what their children are viewing on social networking sites.  If their teens are seeing pictures of other teens partying with marijuana and alcohol, getting drunk or passed out, or using drugs, they may think it looks like fun and want to try it.”

For the first time this year the survey asked 12- to 17-year olds if they are ever left alone without adult supervision overnight.  Nearly one-third of teens (29 percent) say they have been left alone overnight.

Parental expectations, particularly expressing strong disapproval of teen substance use, can be a decisive factor in a teen’s decision to drink alcohol, use drugs or smoke tobacco.  Compared to teens who say that their parents would be extremely upset to find out that their child smokes, drinks or uses marijuana, those who say their parents would not be extremely upset are:

“The take away from this survey for parents is to talk to their children and get engaged in their children’s lives.  They should ask their children what they’re seeing at school and online.  It takes a teen to know what’s going on in the teen world, but it takes parents to help their children navigate that world,” said Emily Feinstein, CASAColumbia’s Senior Policy Analyst and the project director of the teen survey.

Other Notable Findings Related to Teen Substance Use

CASAColumbia is a science-based, multidisciplinary organization focused on transforming society’s understanding of and response to the disease of addiction.  Founded in 1992 by Former US Secretary of Health, Education, and Welfare Joseph A. Califano, Jr., CASAColumbia assembles the professional skills needed to research, prevent, treat and eliminate this disease.  CASAColumbia conducts research and utilizes the scientific findings of others to inform Americans of the economic and social costs of substance use and addiction in all sectors of society and its impact on their lives.  CASAColumbia aims to reduce the stigma attached to this disease and replace shame with hope.