its not about the gum.

So today, I have had four hours of sleep.  I got about 40 minutes this morning from 5:40 to 6:20am.  then I got about an hour later in mid-morning.  Then I got two hours mid-afternoon.

I woke up to discover that my cell phone was missing.  I woke up with heartburn and went to get the pack of gum that I use to help me combat the heartburn. Missing.  I got the phone back.  No luck on the gum.

It isn’t that he stole the gum, it is that he feels no compunction or remorse in doing so.  His story changed no less than four times and resulted in a full out meltdown in which he was begging at the top of his lungs for someone to save him.

I never touched him except to calm him down.

So we got him calmed down. for the rest of the week he isn’t allowed to wear either pants or shorts with pockets. 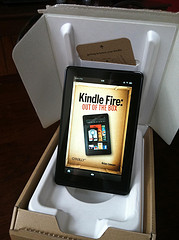 Kindle Fire: Out of the Box (Photo credit: Brian Sawyer)

Oh, and after he calmed down, I discovered that he had played with my laptop and stolen my Kindle Fire.

Still no word on the gum though.

So far today he has stolen his brother’s cell phone 3 times, my cell phone at least twice, my Kindle twice and who knows what else.