We had to run some errands this afternoon.  As we were pulling off the freeway and stopped at a red light waiting to turn, Elliott noticed something.

Elliott noticed that there was a man standing on the corner holding a sign.  The sign said,  anything helps.  Elliott peppered me with questions as to what that meant and I explained that some people have much less than we do.

Elliott was puzzled by this and asked me how it was possible to have less than we did. That kinda stung a little bit,  but he didn’t mean it that way.

I explained that sometimes people can lose everything they have and be left without much left.  He then wanted to know what the sign meant.  I told him that this man appreciates any help,  no matter how big or small.

Keep in mind,  this whole dialog took place in the 3 or 4 minutes we were stopped at the light.

I asked Elliott what he thought we should do.. He said that we should help him.  So we collected up everything we had,  which wasn’t much and gave it to the man standing on the corner..

Elliott was so happy that we did that and I’m really proud of him for having that much compassion for a his fellow man.

It’s not easy to give away like that when you literally have nothing to take care of your own family with.  Having said that,  it was the right thing to do and it was an amazing lesson to teach the boys about compassion.

Whoever says that #Autism makes you less of a person,  couldn’t have be more wrong.

We watched as dozens of cars passed the man by without a second thought.  In the end,  it was a little boy with #Autism that came to the aide of a perfect stranger.  I couldn’t be prouder.

Look for “Autism Help” app at the Google Play Store

This was posted via WordPress for Android, courtesy of Samsung’s Galaxy S III. Please forgive any typos. I do know how to spell but auto-correct is working against me. 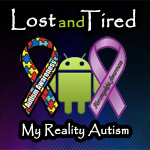 Father to 3 boys on the #Autism Spectrum. Author of lostandtired.com. I raise #Autism Awareness by creating dialogue and breaking the silence.