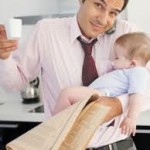 A new state-by-state analysis released for Father’s Day shows how little the nation supports and protects employed fathers when a new child arrives. The special report, Dads Expect Better: Top States for New Dads, includes an analysis of state laws and regulations governing paid leave and workplace rights for new fathers in the United States. It finds that only 14 states and the District of Columbia are doing anything at all to help new dads who work in the private sector.

The special report was compiled by the National Partnership for Women & Families using its recently released analysis of state laws that help new parents in both the public and private sectors, Expecting Better. Dads Expect Better focuses on state laws that apply to both new fathers and new mothers and ranks the top states and the District of Columbia based on their enactment of these inclusive family friendly public policies.

“Our analysis makes it painfully clear that workers and families in the United States desperately need family friendly policies,” said National Partnership President Debra L. Ness. “Employed men and women in this country need policies that allow them to care for their families without sacrificing their economic security. Sadly, our public and workplace policies are failing too many working parents. America’s families expect and deserve much better.”

According to the report, 14 states and the District of Columbia have laws in place that expand upon federal law to address the needs of new and expecting fathers who work in the private sector. California and New Jersey lead the nation by providing paid family leave insurance to both mothers and fathers. Connecticut and the District of Columbia are the only two jurisdictions that guarantee workers the right to earn paid sick days. And Maine, Oregon and Washington are among the states that have expanded access to unpaid, job-protected leave for workers not covered by the federal Family and Medical Leave Act (FMLA).

Past research, including two recent studies commissioned by the National Partnership, shows that access to paid leave policies makes it more feasible for fathers to take leave in connection with a child’s arrival, and fathers who take leave are more likely to be involved in that child’s direct care long term. Controlling for other related factors, fathers who have access to paid leave are also less likely to receive public assistance and food stamps in the year following a child’s birth than fathers who do not take any leave. Despite these benefits, Dads Expect Better finds that 18 states do nothing beyond what federal law requires to offer new fathers or mothers leave from work to care for a new child. Another 18 states have laws in place that only help new mothers or state employees.

“A few states have taken steps to protect the health and economic security of new fathers and mothers and their families,” explained Ness, “but progress is painfully slow – despite an urgent need and significant, demonstrated benefits for our families, businesses and communities. It’s time for policymakers to be responsive to the needs of working families and analyses like this one. America’s fathers and mothers cannot afford to wait any longer for public policies that enable them to be good workers and good family members, especially when children arrive.”

At the national level, the Obama administration has proposed a state paid leave fund that would help foster state innovation and support states that want to create their own paid leave programs. And some members of Congress who recognize the struggles families face are working on a proposal for a national paid leave insurance program, which would establish a national standard and greatly increase access to paid leave for America’s families.

The United States’ policies for new fathers lag behind those of other countries. At least 66 countries ensure that fathers either receive or have a right to paid leave when a new child arrives; at least 31 of these countries offer 14 or more weeks of paid leave. Among 21 highly competitive countries, the United States ranks near the middle by guaranteeing fathers 12 weeks of unpaid leave through the federal FMLA, but only about half of the workforce is eligible and many cannot afford to take the unpaid leave it provides.

To determine the ranking included in Dads Expect Better, the National Partnership reviewed different, but overlapping public policies aimed at helping new fathers who work in the private sector in each state and the District of Columbia.

Released for Father’s Day, Dads Expect Better is a comprehensive assessment of state and federal policies that help new fathers. The report is available at www.NationalPartnership.org/DadsExpectBetter.