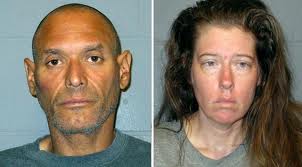 It was a quiet week for those of us who are constantly on the prowl for stories about the nutsy things parents do with their kids. But then along comes this one, which restores my faith in humanity. Or, rather, my faith in humanity’s never-ending ability to outdo itself in the “are-they-out-of-their-freakin’-minds?” department.

A customer at a Wal-Mart in Lawrence Kansas, alerted the police to a young boy, tied up and blindfolded, outside a Chevy Suburban in the parking lot. When the cops got there, they found not just one, but two kids bound and blindfolded–the boy and a 7-year old girl. Oh, and there were three other kids, ages 12, 13, and 15, inside the car as well.

Police arrested a couple from a Chicago suburb, Adolfo Gomez Jr., 52 and Deborah Gomez, 43, and charged them with child abuse and child endangerment. 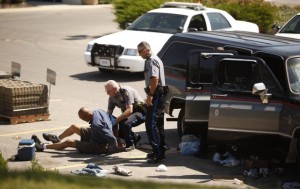 According to news reports, the Gomez family was on a road trip to Arizona and had some car trouble. One of the arresting officers said, “As we continue the investigation and interviews (with the children), we are hoping to understand the dynamics of the family, what’s occurred the last couple of days and possibly what their intentions were.”

What? Who cares about their intentions? Leaving three teenagers in a car is fine. But tying up and blindfolding two little kids and leaving them outside the car is just plain crazy. Why not stuff them in the trunk or suspend them upside down from a flag pole?

There’s one more piece to this scene. While the blame definitely sits squarely on the parents’ shoulders, I’m curious about why none of the teens thought to untie their younger siblings and bring them inside. Clearly, none of the family members has a particularly solid grasp of right and wrong. We can only wonder in horror at what those teens will do in a few years when they’ve got kids of their own….