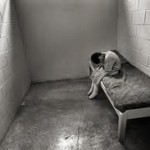 An 11-year old boy raided the family fridge. Big deal–I’d be amazed if an 11-year old didn’t raid the fridge. But for his parents, that simple act was so bad that they made him spend every night in a tiny jail-cell of a room–concrete walls and floor, no windows (the only one had been bricked up), a bare bulb for light, and a ratty mattress and sleeping bag for warmth.

Apparently there was a starvation element, too. Doctors who examined the boy after his rescue said he was underweight and anemic.

This punishment (aka torture) went on for an entire year–and might have gone on a lot longer if people at his school hadn’t begun to wonder why he was hungry all the time and notified the authorities.

Now, if you thought that was outrageous, the parents were sentenced to just two years in jail–doesn’t sound like nearly enough to me.