My 10 year old would give Houdini a run for his money in the magic disappearance category. 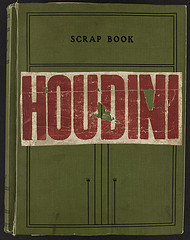 What is spooky about it is when he goes into a room you can tell that he is cataloging the contents of the room.  Determining thos items that he can take.  It isn’t suspicion that makes me think this.  I have seen him do it.  Then when he fixates on something, that item disappears as quick as you can blink your eye.

The item might be of little to no value, and it might be expensive, it doesn’t matter, once he sets his mind to it, that item becomes his, or at least he thinks it does.  What makes a person think that way?

His therapist claims that he knows right from wrong, because he knows that we will search him and he puts things in places where he knows we won’t search.  Calculating? or honest mental illness?

On the one hand, I think that it is calculating.  He knows that he will get in trouble for stealing things that aren’t his.

On the other hand, one would think that he would eventually hate being in trouble and stop doing the behavior.  He doesn’t respond to award or token appreciation for positive behavior reinforcement.

Tonight for example, I was working on giving him his medication.  He looked at me with a sly little grin on his face.  And asked if he could go to the bathroom after he took his pills.  Normally the answer would be yes, however we have discovered that he has been forcing himself to vomit his meds up.

How did we learn that?  Well that is a lesson for me to share with you on another day in the form of an article, rather than a post.

No, I don’t think that it is an eating disorder.  He just doesn’t want to take his meds.  We are working with is therapist and psych team on a solution.