So I noticed this huge ball of lint under the front of my fridge.  I pulled the panel off and was horrified by what I saw.

Not to mention the heat.

The coils for my fridge are on the bottom.  There is a fan in the back, and on the left side there is a water tray.  After removing the front panel, I pulled out the water pan. Praying that I wouldn’t find any mice or anything like that crawling around.  Getting that out of the way allowed me to be able to snake the hose of my shop vac all the way to the back on that side.  I pushed the hose in and then turned it on.  You could literally hear the balls of lint as they got sucked up the hose.  After it stopped making noise, I pulled the hose out and took my appliance brush over to the other side.

An appliance brush looks like a long back scratcher with a hair brush on one end. 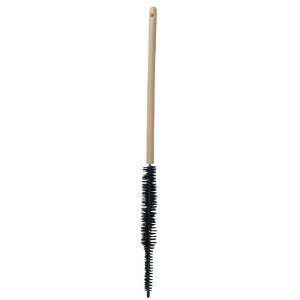 Inserting the brush between the top set of coils and the bottom of the fridge allowed me to get at a third of the lint in the unit.   Waving the brush from side to side also stirred up a cloud of dust, causing me to grab a face mask to filter out the dust so I could breathe.

I did this for each layer of coil.  On my fridge, there are four layers.  I then took my flashlight to see what was left and if any coils were bent or damaged.  Using the flashlight in tandem with the brush and vacuum, I was able to get the last balls of lint out.  It took a half hour, and the fridge seems to be running quieter.  I imagine that in time it will run better as well, and we won’t have issues with it freezing stuff that is in the bottom of the fridge.