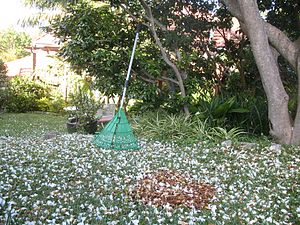 So David and I got the lawnmower serviced and ready to start the mowing season.  We even mowed a small section of the yard, shh don’t tell anyone, I am not supposed to do that. it will be our secret.   David and I raked some leaves, and he loaded small pieces of garbage into the wheelbarrow.  I thought it was a waste of time, but hey, it kept him entertained.

We were outside in the shade for about 4 hours all told today. It was a good day. Tomorrow I imagine I will pay dearly, but we had a good time.

We had a science lesson about compost heaps while we were out there, as well as the role that earth worms play in decomposition.

David found the worms gross and disgusting. (his words)

After we got done with those things, David spent time shooting hoops.  I think that the boy will have skills if we can just keep his temper under control.

So now I am inside sitting on the couch.  Contemplating making supper for the kids.  And no, this isn’t a picture of our yard.  Cheers friends.