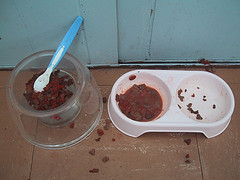 I give him this, he is creative in his abilities to take things with slight of hand.

So far we have found: 3 opened cans of cat food.  He says that he was hungry. (the cat food is stored in the same cupboard as the people food, at the very bottom of the cupboard.) He knows it is cat food.  Says he was sharing it with the cat.

1 set of keys to each vehicle we own.

oh, and he has made himself throw up his meds again.  both last night and this morning.  Plus he has admitted to doing this while he was at his respite home on Sunday.