One of the most prolific gestational surrogates ever, Meredith Olafson, just retired her uterus–after 11 surrogate births, including six c-sections. Olafson, a 47-year old nurse in North Dakota who also has four children of her own, carried three singletons, a set of twins, and two sets of triplets for other families. 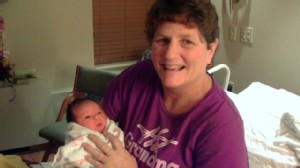 Meredith’s gestational heroics have been outmatched by only one other woman on record. A British woman who gave birth to 12 babies not her own. And there may be a new challenger on the horizon as another surrogate is about to give birth to babies 9 and 10.

More on this story here: http://abcnews.go.com/Health/super-surrogate-mom-meredith-olafson-retires-uterus-15th/story?id=16126645#.T4yF1atSQi0