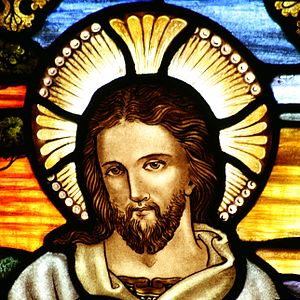 Stained glass at St John the Baptist’s Anglican Church http://www.stjohnsashfield.org.au, Ashfield, New South Wales. Illustrates Jesus’ description of himself “I am the Good Shepherd” (from the Gospel of John, chapter 10, verse 11). This version of the image shows the detail of his face. The memorial window is also captioned: “To the Glory of God and in Loving Memory of William Wright. Died 6th November, 1932. Aged 70 Yrs.” (Photo credit: Wikipedia)

My friend Stan could be difficult at times.  Never was there a more self-deprecating man.  On the other hand, his complete and utter faith that he would be greeted by Our Lord and Savior was refreshing, and I admit at first, off-putting.

We had a disagreement a few weeks ago over his job.  He was obligated to report what he thought was a harmful environment for a student.  But didn’t want to make the call.  I told him that I wouldn’t speak to him again if he didn’t hold true to his ethics.  He was afraid he would lose a friend.

In the end, he made the call.  He learned that the family in question was already doing everything possible for their kids. He did his job and held true to his ethics.

The family he had to report was mine.

I still consider him a friend.

Stan passed away on Saturday, April 7th, 2012.  He died alone at his house.  Stan isn’t from the same town we are.  He lived and worked here, but he called another town home.  It was in that town where he died.  Asthma can be a bitch. In the end, it took his life.  I feared for a long  time that Stan would take his own life, but in the end, I think that he felt it would go against God’s will to do so.

Stan and I had frequent conversations about our faith.  I admit, in the beginning, I answered Stan’s questions with what I thought he wanted to hear.  In a conversation last month though that changed.  Stan knew.  He called me on it.

Stan could always tell when someone was pulling his leg.

Stan was facing a tough time.  He was at a point in his career where he was looking for a new adventure. He had talking to me about how hard it was going to be for him to say good bye to the kids in our school district.

Stan was the type of guy who would go to any length to defend his friends.  I am proud to call him my friend. I am honored that he considered me his friend.  I believe in my heart that he is at peace and greeting Our Lord and Savior with open arms.

We enjoyed having Stan visit us over the course of the four years he was in our lives.  He ate many meals with our family and became a part of our family.  It is with sadness that we say “Until we meet again…”

You will always have a place in our hearts Stan.

UPDATE
I posted a memories page with the thoughts and memories that people have shared with me about Stan.  You can find it here.

Update 2.  It has been a year since you left us Stan.  I think of you often.  Know that you are in our prayers.