Today was a good day.  Some issues with David listening, but that isn’t unusual.

During lessons today we did some grammar and spelling worksheets. One of the worksheets was unscrambling letters to form a word.  The shortest word was 6 letters.  Twelve words total, took him less than five minutes. 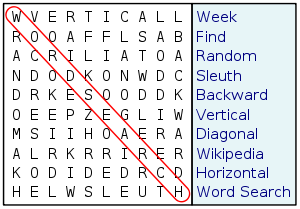 I asked him how he does it, and he said “I just see the letters the way they are supposed to be. ”

As a treat I gave him a word search, which he loves to do.  In no time, he was done with his lessons, and you know what?  I had no problems getting him to work on his lessons.  Now he is playing baseball on the Wii.  Tomorrow we will go outside for a while so he can shoot hoops in the driveway.

During lessons today, I told David that we need to concentrate on the good aspects of what makes him who he is.  I explained about how he has trouble listening, and how he can do the word scrambles and searches so easily.  I explained that some things are gifts that we can work on developing.  I wonder what other gifts he has that haven’t been tapped into yet!