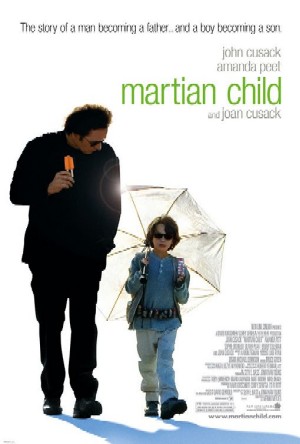 I DVRed, Martian Child because one of the main actors is John Cusack. Who is one of my favourite actors, and has been since the days of “Better Off Dead”.

This movie, oh, how do I explain this?  This movie touches on a subject that is dear to my heart.  The character that Mr. Cusack plays, David, , a father, adopts a boy, Dennis.  Dennis thinks of himself as a Martian.  He has special needs.

The movie starts out with David debating the thought of adopting a child.  During the process of making this decision, we see him engaging this child, and bringing him into his life.  What some might find odd is that the child appears to believe that he is actually a Martian. He knows, does and says things that make the audience believe that he could in fact be a Martian.

David, begins to develop a deep abiding love for the child, and struggles with what he sees as misconceptions of those who are involved in their lives.  He is in fact, stunned when the school expels his son because he is different and has special needs that can’t be met in that school.

The movie is a quiet study of human nature and the struggle for a child to fit into his environment.

In the end, we see David, and his son, Dennis, embrace life.

I won’t say more about this movie, except to say, you should see it.  It isn’t a headliner type of movie, in truth I had never heard of it, and if it had not been for a late night keeping track of our son David, I wouldn’t have caught it at all.

« key noises while typing
should I feel guilty? »