Keys, Keys, where are the Keys?

David, demands attention.  If you don’t give it to him, he will do something negative.

What is the definition of negative?  Theft.  Yelling. Lies. those kinds of things. 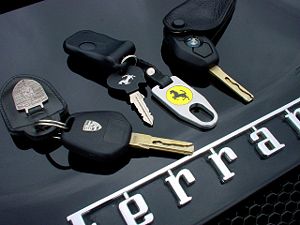 Yesterday a set of mom’s keys went missing.  David cried about how he didn’t take them, and how we should believe him just this one time.  I then went through his room.  I found:

I didn’t find the keys.

Eventually, David said he would help look for them.  I granted him amnesty if he would just give them back.  All of a sudden he remembered seeing them in a clothes basket upstairs.  So we went to see if they were there.  Sure enough, buried under the clothes in the basket were the keys.

They magically appeared there, as David denies that he took them.

David then proceeded to blame everyone he could think of.  I explained that the whole time he was gone to the residential facility, that nothing was stolen in our house.

« hoarding of electronic gadgets
Thoughts of a reformed thief »