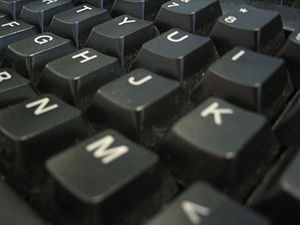 David has these old keyboards to play with. We lop the cord off, and he plays with them until the keys start to fall off, or we get tired of stepping on them.  We have gotten as much as a year out of a Compaq/HP keyboard.  It entertains him, and he knows that is the only one he can play with.

David decided that the noise he heard when he was typing on his keyboard wasn’t right.  It was, as he put it, “boring.”

So he went looking for a keyboard that made the right noise.  Found a scissor, lopped the cord off, and now he is happy.

It was my favourite keyboard. No idea why it was my favourite.  I just liked typing with it.  Odd that I should think that, after all, I haven’t used anything except a laptop in over a year.  Oh, well.