We take on the mantel of protector, the fixer, and the provider.

David was on the run for a week.  He told me that he wouldn’t go easy when law enforcement caught him.  Three felony warrants for probation revocation.

I asked, “Are you suicidal?”

Because to me, that is what it sounded like.  Suicide by cop.

So, while I didn’t know where he was, I did let his probation officer know my fears.  Thankfully he was captured uneventfully.

I haven’t been able to protect him.  And for a long time, I couldn’t protect the rest of the family from him without incident.

I have been on disability for 8 years. So I am not the provider I promised that I would be.  Anyone who gets a disability check knows, that you are far from wealthy.  It’s not even enough to pay rent if you need more than a small apartment.

Here I am.  An advocate for change.  However, change occurs so slowly as to feel like turtles are moving faster.  In North Dakota, we have had study after study regarding mental health.  Now we are studying the Developmental Disability System and why so many are denied care and support. 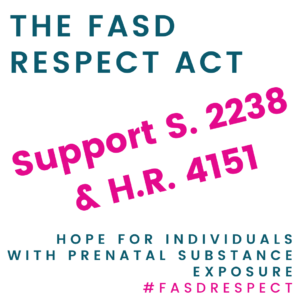 David just turned 20.  Last week during his initial appearance the judge told him that he could get 20 years just for the three revocations.

And so, I will continue to fight.

See, on some level, I understand that the failure isn’t mine. It’s a failure of the system.

All of us deserve better.

In other news.  At the Federal level, you can learn about important advocacy work that we are undertaking with the National Organization on Fetal Alcohol Syndrome.

Most notably the FASD Respect Act.  You can sign a letter of support, either as an individual or as a representative of your organization.