So fifteen days ago David had the opportunity to attend FASD Camp. 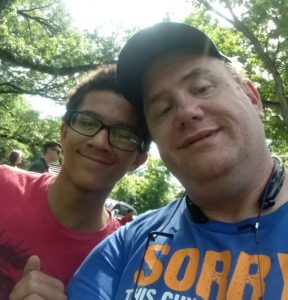 The day I dropped him off, I snapped a selfie of the two of us. Minutes after snapping this photo, he was off meeting new friends with the same disability that he has.

Yes. My son has a disability.  You can’t tell it by looking at him.  That disability is Fetal Alcohol Spectrum Disorder (FASD).  It is not the only one he has, but it is the focus of this post.

We learned last winter of this camp called fasdcamp.  It is just for kids with FASD.

Thus began the process of applying for camp which began before he came home from care in January. In mid-April, we learned that he had been accepted. This was after a rather lengthy telephone conversation with the camp medical director about David’s condition.  See, they want to ensure that the only campers attending are the ones who have FASD.

Our primary hurdle was financing camp.  At 895 dollars for the camp tuition, it’s not inexpensive. (I was later to learn the true cost of each camper and realize just how inexpensive it is for the parents).  But I digress and that is a topic for my next post.  With the help of his care coordinator, we were able to obtain some funding for tuition. As a result we applied for and received a scholarship.  It covered a bit more than half of the cost.

Funding was found to pay the fuel cost for driving to the wilderness camp north of Chicago… (yes, I know a wilderness camp in the Chicago area?  it’s true) From our home it is roughly 1100 miles one way.

We paid for our food and lodging both enroute and while I was in Chicago.

And because a parent needed to be within 8 hours of camp, I put myself in a hotel just over an hour from the camp for the week.

Let me tell you, it’s expensive to send a child to a special camp focused around their disability. And we didn’t travel as far some did.

Camp began on a Sunday at 3, and then ended on the following Friday at 9 am.

Being the father of a child with a disability, I found that I was rather at odds with myself while I was in Chicago. When you have a child like David, you are vigilant. Always.  So even though David was in camp, he was never far from my mind.  In a fit of trepidation, I reached out to camp staff asking for information about how he was doing.

On Friday morning, I got to camp about four minutes past nine. I was worried he would think I had left him there. Any other time I had taken him some place and then left, he stayed there for up to fifteen months. I needn’t have worried, as the campers were still at breakfast.

I loaded his stuff – it was all in his tub – what is it about summer camp that makes clothing smell so bad?  Oh yes, it’s called fun.

Following that, I joined the rest of the parents where we all introduced ourselves and told what we did for the week.  Some parents talked about how they felt, the relief, the angst and worry, the fear of leaving their child in the care of another for 6 days.  And then the campers came up the hill from breakfast, not unlike a thundering herd of stampeding buffalo. All searched out their parent or parent figure.

David was no different. We heard them coming, and no sooner had I turned my head than I had David in my arms wrapped up in a bear hug.  He sat next to me.

David received something called the “mento award” that morning. An award given to him because of his mentorship of a much younger camper.  Camp staff identified David as a natural leader for others like him. It was really, a pretty neat event. All of the campers were singled out for something wholly unique to them.

After, each of the staff were introduced, we left.

To say I feel blessed to have been able to let David enjoy this experience is an understatement.

Here are some photos from camp. All photos are owned by Camp FASD.  Copyright is held by their office.