It’s been forever since we posted about David, and this is a result of our decision to transform how we saw parenthood. Specifically parent hood of David. The decision to transform was easy, actually beginning to transform our parenting styles was much more difficult. This post is about what that looks like for us, for David and for our family. Readers may remember that David came home in January of this year. During the last months of his stay in the care facility, we heard repeatedly that they had cured him. An adjective that we frequently heard was how

Beginning in November of last year, mom and I began discussing how we could adapt our parenting to David’s needs.  Because honestly, what is hugely important to mom and I, has no bearing to David and his life. Those things that impact neuro-typical kids one way will impact him in an entirely different way.

As a result of the damage caused by the Fetal Alcohol Spectrum Disorder, David doesn’t process most things like the average kid.  Part of trans-formative parenting is the ability to acknowledge this. To embrace it. To accept it. 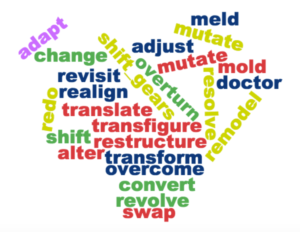 In our home it’s a minor thing, as all of his siblings are either away at college, or starting their own families.  When we brought David home we informed the school that he was rather adept at taking things, such as cell phones, without permission. For two months we didn’t have any reports of theft.

Then it happened. A report that someone’s cell phone was missing.  David was the alleged culprit. The school resource officer met with him after the school principal had done so, and he continued to deny the theft. He denied it for three days. He isn’t dishonest on purpose. Seriously. It’s a symptom of his disability. Yes, we hold him accountable.

In the end, the phone was recovered, David was charged with two crimes. Theft, and lying to law enforcement.  He had to report to juvenile court where he was found to have potential to repeat the crime. They determined this after testing.  (We could have told them that without testing.)

David was dearly afraid he’d get hauled away to juvenile hall or another facility.  We stood with him.

Two months later we have experienced no other incidents of theft. In the coming posts, I’ll discuss the how and why of that.  Because the power of our transformation was incredible for his mother and I.

I admit, there are times when both mom and I revert to our old ways, but we do recover.  We are all much happier with this version of our life.

We aren’t done by a long shot, but admitting that will be one of the keys to long term success.

Part of our transformation as parents came from reading two books. The first, Born Broken by Kristin Berry. The second came later, Confessions of an Adoptive Parent.  There were a number of other books that I began reading and am working my way thru. Books such as The Body Keeps the Score by Dr. Bessel Van Der Kolk. I have also read a lot of information about Adverse Childhood Experiences (ACES).

There are so many books to read, I prefer mine on the Kindle as much as possible. I don’t make any money off the mention of any of these books or products.

One more thing.  If you have time, I strongly recommend you browse over to Confessions of an Adoptive Parent.  Mike and Kristin get it. They get it because they have lived experience.