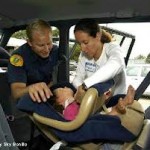 to the Centers for Disease Control and Prevention, car crashes are the leading cause of death—and a major cause of injury—for children under 3. And car seats are by far the easiest way to reduce those risks. In fact, proper use of car seats reduces infants’ risk of dying in a car by 71%, and by 54% for kids ages 1-4. Emphasis on the word “proper.”

A study just published in the American Journal of Preventive Medicine took a look at just how many parents are following the car-seat safety guidelines laid out by the American Academy of Pediatrics.

You can get the complete list here. But just to summarize, infants and toddlers under age two should be in rear-facing seats in the back seat of the car—unless they exceed the seat’s height and weight restrictions. After age two, kids should transition to front-facing seats, but still be in the car’s rear seat. When toddlers outgrow their carseat, they should be moved to a booster seat until they’re big enough to use a regular seat belt. That’s usually somewhere between ages 8 and 12 and when the child is 57 inches (4’ 9”).

The results were horrifying: Just 3 percent of kids under three were in rear-facing seats, and only two percent of kids over 7 were still in booster seats. Kids older than that were often riding around with no restraint at all. And even among the children over seven who were in car seats or boosters, fewer than 2 percent were using them properly.

Minority children were even worse off. Black and Hispanic infants were 10 times more likely than white infants to be in a car seat at all (but that’s still not good news, since only 17%of white infants were in rear-facing seats). In addition, 35% of black children and 26% of Hispanic children ages 4 and 5 who should still have been in booster seats, had were using seat belts. This compared to 16 percent of white kids the same age.

As with most things, it’s up to us as parents to set a good example. The study found that when the driver isn’t wearing a seat belt, children in the car are 23 times more likely to not be wearing one either.

So do yourself and your family a favor: read the AAP guidelines and, if you aren’t 110% sure that your carseats or boosters are properly installed, check with your local fire department or highway patrol—they often have inspectors who would be glad to show you.

You can read the full study here.