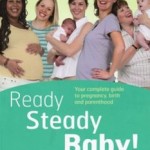 Take a look at the image to the left. It’s the cover of a popular British parenting guide that’s fully funded and distributed by the government. You’ll notice that the five adults on the cover are all women. Ah, excuse me. No dads? Hmmm. That’s annoying, but not terribly uncommon (I teach a class at a major hospital in San Francisco. The folders attendees get are imprinted with the words Women and Children’s Center and include zero images of men).

But what I find especially disturbing is that dads have been left out of the inside of the book as well. The book used to include dads. But they recently got a complaint–a single, solitary one–that the book might offend same-sex couples. So the word “dad” has been completely removed from the book. Gone.

Interestingly, male same-sex couples have no objection to the word “dad”–largely because they actually are dads and would like to be called that. And I’d say that at least once a month I hear from the non-pregnant partner in a lesbian relationship who… wait for it…. wants to take my class, which is called “For Expectant Fathers Only.” There’s also a popular blog, written by a woman, called Lesbian Dad. So most non-pregnant women don’t seem to mind the term “dad” either.

But one malcontent makes an offhand complaint about the use of a word in a book that is accurate for the majority of readers and the British government stops the presses and takes the word out of the entire 220 page book).

I wonder whether the National Health Service (NHS) would take the word “mom” (or, since we’re talking the UK here, “mum”) out of the book because it offends same-sex couples. After all, if two men are raising a child, one of them isn’t  “mum.” But taking the word “mother” out of a parenting book would be absurd, wouldn’t it? After all, a child couldn’t be born without a mother, right? Oh, wait. A child couldn’t be born without having a male (is it safe to call him “father”?) involved.

And what about couples who use assisted reproductive technologies such as artificial insemination, in vitro, donor sperm, donor eggs, and so on. It’s entirely possible that the couple raising the child aren’t biologically connected to it in any way. It’s okay to call the female parent “mom” but it’s not politically correct to call the male parent “dad.”

I don’t find this a whole lot different than the Procter & Gamble ads I’ve been complaining about for the past two weeks. If you haven’t already done so, please sign the petition urging P&G to get with it and start including fathers in their ads.

We all know about the toll fatherlessness takes on our children and our society. And we all want dads to be more involved (well, except for the one person who complained to the NHS). But if that’s what we truly want, we’re going to have to take the extraordinary step of acknowledging dads exist and giving them the tools and support they need to do their job. Deliberately excluding them from advertising and government publications sends the exact opposite message. No dads allowed. A very dangerous message indeed.