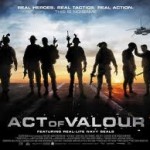 Most of today’s dads are just trying to do the best they can and don’t consider themselves heroes. But for dads in the military, being deployed changes all that.

So who do military fathers turn to for advice on how to be a great dad? Well, in the hit movie, “Act of Valor,” my book, The Expectant Father, is featured as the resource of choice for Navy SEAL dads-to-be! And I have to say, that’s just about the coolest thing ever. Or at least the coolest thing since The Expectant Father was on screen in another hit movie, “Knocked Up.”

Click the image to the left or click here to check out the clip. It goes by kind of quickly so you might have to watch it a few times, but the book is definitely there!